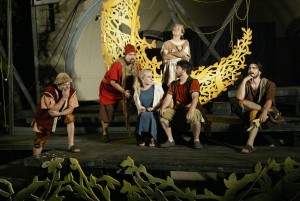 She was directing an outdoor performance of “King Lear,” and as if on cue, the fog rolled in at exactly the right moment.

“We had a scene where a character was describing to the king the world outside, and when that fog rolled in, it set the mood,” said Coltrin. “I got goosebumps!”

This summer, Los Angeles County residents can once again enjoy outdoor theatre, courtesy of the nonprofit organization Shakespeare by the Sea. The group kicks off their 18th season on June 18 at Point Fermin Park with “As You Like It,” and will later feature “The Tempest” on June 25 at the same location.

“I’m proud to once again support this incredible showcase that connects young teens and their families with some of the greatest literature ever written,” said Supervisor Don Knabe. “There is no better setting for a re-enactment of classic Shakespeare tales than the cliffs above the sea as the sun sets.”

Both shows will make stops at parks around the county through August, and even travel south to a few locations in Orange County.

Lisa Coffi, founder and producing artistic director for Shakespeare by the Sea, has seen the tour grow through the years. She came up with the concept as part of her Long Beach State thesis project and has hustled to gather the funds and staffing for every summer since that initial test.

“Shakespeare really was for every man,” said Coffi. “So it’s fitting our shows are offered for free to anyone who wants to enjoy an evening of theatre under the stars.”

Coffi delights in seeing the diverse audiences her shows draw during the summer months. She says on any given night, she’ll see young families, teens, elderly couples, and individuals of all ethnicities and backgrounds.

“It’s truly a communal experience,” said Coffi. “To sit in a park with hundreds of people being utterly quiet to listen to Shakespeare is quite the experience.”

Each season, a small cast is selected in the spring. They rehearse, build the set and then set out to tour in June. This year, 18 individuals will cover a total of 45 roles in the two productions. Coltrin, now an associate festival producer, will serve as director for “The Tempest.” Patrick Vest is directing “As You Like It.”

Coffi, meanwhile, will start booking shows for the following summer, and is always working to secure funds. She now resides in Northern California, but feels so passionate about Shakespeare by the Sea, she has continued to oversee and manage the productions from afar. Still, she comes down for the summers to see the fruits of her hard work. Coffi also runs Little Fish Theatre in San Pedro’s Art District.

“It’s a lot to take on, and I often feel like we are working against the grain,” said Coffi. “But we seem to make it every year, and when I come down to watch the shows, I see we really do inspire people – and many families return every summer.”

To see the complete summer schedule for Shakespeare by the Sea, visit http://www.shakespearebythesea.org. You can additionally learn how to make a donation and keep the summer performances alive in LA County via the website.