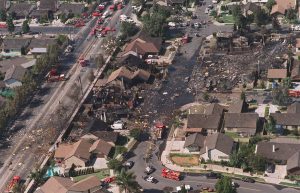 It’s hard to believe, but this Wednesday marks the 30th anniversary of the Cerritos Air Crash. On a cloudless Sunday afternoon in 1986, a small airplane collided with a Aero Mexico DC-9 in the skies above Cerritos. Death and destruction rained down on our city, devastating a community that is still feeling the effects to this day. I was Mayor of Cerritos at the time, and there is no manual you can turn to for advice on what to do when a passenger plane goes down in your city or how to help your community and neighbors begin to recover.

I went to the crash site the other day. It was my first visit to the neighborhood at Carmenita Road and 183rd street in a number of years. Some of the neighbors who survived the air crash on the ground still live there. Others decided the memories were too painful to stay. As I turned the corner onto Holmes Avenue, my heart skipped a beat, and it was suddenly hard to breathe as a rush of raw emotions came roaring back. I could smell the burning jet fuel again. I could see the rubble and remains of exploded houses again. I could feel the immense loss of our friends and neighbors and the feeling of hopelessness again.

Out of that darkness and despair, there ultimately was some good that came from that day. Air traffic monitoring over our skies changed forever with new transponders that allow aircraft of all sizes to talk to each other, ensuring a similar air disaster would not happen again. And now, in the event of a disaster, our mental health teams will rapidly deploy to begin immediate crisis counseling for victims, as well as first responders who may suffer post-traumatic stress from their experiences.

Thirty years later, I still remember the sense of unity and togetherness that came in the aftermath. In the days after the air crash, the shelters we set up for people who lost their homes sat virtually empty. The residents of Cerritos opened up their homes and made sure everyone had a place to go where they could sleep, eat and mourn. Friends helped friends, families helped complete strangers. I’ll never forget that overwhelming sense of community.

On Wednesday, we will once again come together as a community to reflect and remember. If you would like to join the in remembrance of the anniversary, a memorial will be held at the Cerritos Air Disaster Memorial in the Cerritos Sculpture Garden at 11:30am.