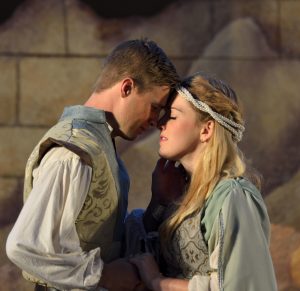 Grab your beach chair, blanket, a basketful of snacks, and a few friends and family members. There’s still time to immerse your senses in the world of Shakespeare this summer.

Now in its 19th season of touring, Shakespeare by the Sea, will hit 20-plus venues by the end of August, sharing popular evening performances in park and beach locations stretching from Los Angeles County to Orange County.

The mobile production company is featuring two shows in 2016.

“We’re doing one that’s rarely produced called Cymbeline, as well as the well-known Othello,” said Lisa Coffi, SBTS’ producing artistic director. “Both have themes that stem from perceived infidelity. In Cymbeline, however, there’s a happy ending where all gets resolved, while in Othello there’s death and destruction.”

In 2015, the small crew of actors and producers performed for more than 20,000 people, and the team expects to exceed that number in 2016.

Each production is estimated to cost $7,210, but the San Pedro-based organization offers the shows to the community admission-free.

“It’s an amazing opportunity to enjoy a classic production under the stars,” said LA County Supervisor Don Knabe. “I love seeing the diverse crowds come out to experience Shakespeare – young families, older couples and teens all relaxing and taking in a little culture from the past.”

To access the complete performing schedule, visit here.
To learn more about Shakespeare by the Sea, or to make a donation to keep the traveling arts program moving, visit ShakespeareByTheSea.org.